How Is the Life Insurance Death Benefit Paid if a Beneficiary Is Deceased? | Q&A Fridays

How is my payout divided up if one of my beneficiaries can’t receive the payout?

Today’s question comes from a blog reader. His question is: I would like to leave my life insurance money to my wife and a small portion to my father and siblings. If something happens to me and my wife at the same time, how does the money get divided up?

Before we answer this question, let’s explain some terms our viewers should know.

There are three players involved in a life insurance policy.

The person who applies for life insurance and pays the premium.

The person who is covered and goes through the underwriting process.

The person(s) or entity(ies) that receive the life insurance proceeds when the insured dies.

There’s the owner of the policy. This person pays for the policy and has control over what happens to it.

Then there is the insured. This is the person whose life is covered by the insurance. If this person dies, the death benefit is paid. The policyowner and the insured are often the same person, but not always.

Then there are beneficiaries. These are the people or entities who are paid when the insured dies.

So, let’s go back to our reader’s question. Let’s call him Tim.

Tim has a life insurance policy and wants his wife, father, and siblings to all receive a portion of the death benefit when he dies. This means he needs to name all of these individuals as primary beneficiaries and designate what percentages each individual’s to receive. He can name any percentage he likes, but it all needs to add up to 100%.

If Tim and his wife die at the same time, like in a car accident, then her death benefit portion would be split equally between Tim’s father and siblings.

Right. So the remaining primary beneficiaries would receive an extra 16.66666%. But this is only if Tim did not specify further designation language.

For example, if Tim would prefer his wife’s portion to go to their children instead being split evenly between his father and siblings, Tim would need to specify this on his life insurance application. He would need to say that he wants the death benefit designation to be divided per stirpes. So with per stirpes designation Tim’s wife’s share would get split equally between Tim and his wife’s children. 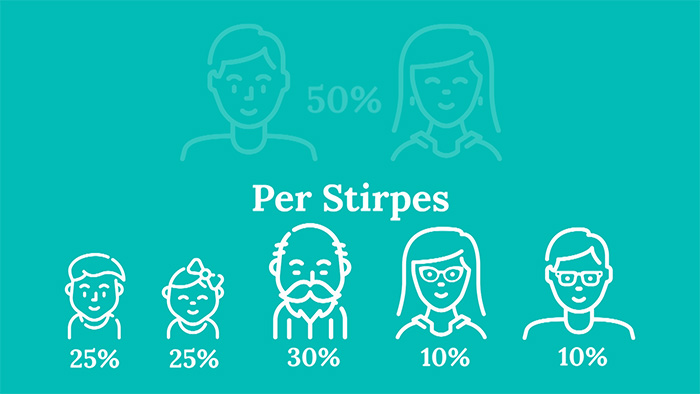 Exactly. If Tim doesn’t specify anything though the default designation is to split the share equally between their surviving primary beneficiaries.

Natasha Cornelius, CLU, is a writer, editor, and life insurance researcher for Quotacy.com where her goal is to make life insurance more transparent and easier to understand. She has been in the life insurance industry since 2010 and has been writing about life insurance since 2014. Natasha earned her Chartered Life Underwriter designation in 2022. She is also co-host of Quotacy’s YouTube series. Connect with her on LinkedIn.