How Life Insurance Is Taxed

By Natasha Cornelius, CLU
April 15, 2021
Our goal is to educate and advise on life insurance options, so you can feel confident in making the right choice, whether that’s through Quotacy or somewhere else. To ensure we provide accurate and trustworthy information, our writers follow strict editorial standards.

They say that only two things in life are certain – death and taxes. Thankfully, when you’re applying for life insurance, you can be reasonably sure that you can avoid taxes on the policy’s payout.

Typically, life insurance payouts are not taxed. For most families looking to protect themselves with coverage, taxes on the payout of a policy should be the last thing on their mind.

Unless your policy falls into a few very specific situations, your beneficiaries will receive the full payout as a lump sum without any deductions or charges (including taxes).

Life insurance proceeds are rarely taxed. But there are a few cases in which owners of life insurance policies will see Uncle Sam take a little bit of money off the top.

These cases mostly have to do with surrendering the policy while the insured is still alive, the policy lapsing, or when the insured takes out a loan against the policy.

Most people receive the death benefit in one lump sum, but some opt for regular installments.

While the installment proceeds are being paid, the balance kept with the insurance company is earning interest, similarly to how a bank account gains interest.

The interest that the insurance company earns on the proceeds will also be going to your beneficiaries as part of the regular payments. However, the amount of each payout check that comes from interest is subject to income tax.

Permanent policies can accumulate cash value greater than its paid total premiums. If you choose to terminate the policy in exchange for the surrender cash value, any gains over and above the normal premium payments will be taxed as ordinary income.

But if a policy is owned by one person, insures a different person, and benefits a third person, then the death proceeds will be considered a gift to that beneficiary and may be subject to gift taxes. Agents refer to this type of arrangement as the “unholy trinity” or the “Goodman Triangle,” based on the court case that established this rule.

For example, if a wife owns policy on her husband, but lists their child as the policy’s beneficiary, then the death proceeds of the policy will treated as gift from the mother to the child when the father dies.

Another ownership issue that could have tax implications is if you transfer ownership and violate the transfer-for-value rules. So, basically, if you sell your life insurance policy then the new owner will be paying income taxes on the death benefit.

Exceptions to the transfer-for-value rule include:

Basically, you paid a high premium upfront in a lump sum and got a certain amount of guaranteed life insurance. It was kind of like a whole life policy that only required one payment.

The issue was that you could also continue pumping money into these plans, which increased the duration and payout of the policy. You were also able to borrow money against the value of the policy as a loan. This allowed people to dump millions into life insurance policies that essentially acted like overblown, tax-free, private bank accounts.

In order to close the loophole that single-premium policies presented, Congress had to act. They passed legislation turning any policy that didn’t pass certain tests to be a “Modified Endowment Contract,” or MEC. This rule was called the 7-pay test.

The 7-pay test places a cap on the amount of money you can put into a policy for the first seven years of its duration. If you pump in more money than the cap allows, your policy becomes an MEC. And MECs are subject to both normal income taxes and an additional tax penalty if you take out loans against the policy before age 59 ½.

However, the death benefit portion of the policy still isn’t taxed, even if it becomes an MEC.

How the Estate Tax Affects a Life Insurance Payout

Life insurance death benefits typically won’t be hit with income tax. But if the value of the life insurance policy pushes you over the federal estate tax threshold ($11.70 million as of 2021), any money in your estate above that threshold will get hit with the estate tax upon your death.

In addition, the state you live in may also have an estate tax in place which can add additional stipulations and costs to life insurance policies dedicated to your estate.

An easy way to dodge this estate tax is to transfer ownership to a family member you trust to dole out the life insurance proceeds. The downside is that you’ll give up all control over the policy to the new owner.

If the new owner were inclined to go against your wishes, they could rearrange the payout’s distribution in a way that doesn’t match what you wanted.

Changing the ownership of a policy is simple. It’s just a matter of sitting down with the person you’d like to own the policy and filling out a form. Life insurance carriers offer these forms as PDFs online, so you can download and print any paperwork you would need.

However, the IRS will look at your case a little more closely if you try to shift the ownership of a policy to someone else within three years of your death.

According to the U.S. tax code, any gift made by a person in contemplation of their own death is subject to at least one year of scrutiny. This law was put in place so that terminally ill billionaires couldn’t dodge the estate tax by giving their entire estate away when they’re informed that they’ve only got a short time left to live.

Life insurance is actually the only type of gift that is subject to a three-year lookback in an extension of that rule. It helps the IRS determine whether or not the ownership of a policy was changed solely because the person being insured believed they were going to die soon.

If the ownership change was made in contemplation of death, the payout of the policy could be subject to taxes.

Setting Up an ILIT

An ILIT is a type of trust that can’t be rescinded, amended, or modified by its grantor (or creator) after its creation. Instead, the grantor gives all control of the assets managed by the trust to a “trustee” who oversees the distribution of those assets according to the trust agreement.

The benefit here is that the official trust agreement is a legal document listing your wishes. It’s an effective way to ensure your estate is distributed correctly ahead of time.

To go the ILIT route, you buy a life insurance policy and then set up a new trust. The trust owns the policy and you establish someone you trust, or a professional, as the trustee. This way, the life insurance payout is kept separate from the estate, and it isn’t taxed. 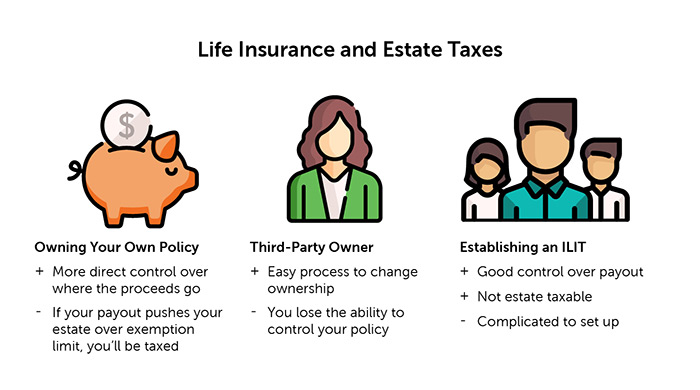 For 99% of people buying life insurance policies, the payout won’t be taxed.

The payouts from term life insurance policies are almost always tax-free. Except in situations where the insured, the policy’s owner, and the beneficiary of the policy are all different people. Or if the policy death benefit would put your estate over the estate tax threshold.

Permanent life insurance policies’ payouts may be taxed. But typically only in situations where you take advantage of their ability to accumulate value and serve as short-term loans from your insurance company.

If you do not yet own life insurance, start the process by getting life insurance quotes online here at Quotacy. Your Quotacy agent can answer any questions along the way.