Hidden Sodium and Your Blood Pressure: A Detective Thriller

For me, a good meal is one of my favorite ways to spend time. Big, sloppy sandwiches? Soup, salad, and breadsticks? Conveyor belt sushi? Surf ‘n’ turf specials? Mongolian stir-fry? Fanciful little hors d’oeuvres? Any day of the week.

But even though I’ve cleaned up my act, I still feel the pull back to the other side. If I had my way, I’d eat a lot of absolute garbage, and that’d be really bad for my health long-term. It turns out that your diet can affect more than just your weight, it can contribute to your blood pressure as well.

Sodium is like a microscopic sponge – it attracts water molecules. Your body naturally needs a certain amount of sodium to help keep your fluids balanced, your muscles healthy, and your nerves functioning properly.

But too much sodium can be bad for your heart. This is because excess sodium in your blood soaks up extra water, making your blood volume higher. Your heart then needs to pump harder to move your blood around, resulting in higher blood pressure.

According to the Mayo Clinic, the average american consumes almost double the 2,300 mg daily recommended limit of sodium, and it doesn’t just come from the salt shaker on your dinner table.

This initial research made me wonder: how much salt do I eat? On the day I started investigating, I planned on keeping track of my sodium intake all day, just to get a feel for which foods to look out for. I could never have guessed the betrayals I would suffer.

I looked up my body composition and decided to set my sodium limit a little higher at 2,500 mg, since my baseline diet is around 2,500 calories to maintain my healthy weight.

(For reference going forward, 1 tablespoon of normal table salt contains around 7000 mg of sodium, almost 300% of the recommended max value.)

On the day of my investigation, I woke up late, so I fell back on my emergency breakfast: two packets of instant oatmeal. I had a hunch that it would be relatively sodium-free, and in this case, my instincts were right.

Fresh fruits and whole grains, like oatmeal, are typically safe from sodium. Most of the sodium in instant oatmeal comes from the added flavoring powder. This additional salt was the first clue to a disturbing pattern: salt tastes good, so companies add a little extra here and there to enhance the flavor of their food.

Flavor laundering. Better chefs than me have figured out that salt tends to reduce bitter flavors while bringing out sweet flavors. It also powers up less noticeable flavor compounds, making you want to come back for more.

This is why pairing a bitter, tannic wine with a seasoned steak makes the wine taste better – the salt from the steak mutes the tannens and lets the other flavors shine. It’s also why adding salt to bread dough doesn’t necessarily make the bread taste salty, it just makes the bread taste how we expect it to.

My breakfast was pretty low-sodium – only 340 mg. I then popped open a Diet Snapple Lemon Tea and hit the street.

“Only 15 mg per bottle,” I thought, “that’s practically nothing.” I made it through my first full meal at under 15% of my recommended sodium limit.

I’ll admit it, I was feeling cocky, even invincible. But then… I decided to investigate a popular international submarine sandwich restaurant.

Salt is everywhere, and if you don’t care what you eat, you can find yourself eating double or triple the recommended maximum, which has been proven to contribute to high blood pressure.

I picked up my typical order for when I don’t have time to make lunch: a footlong melt with kettle chips and a Vitamin water. Whole grain bread, a good chunk of protein, and practically a whole salad on top. I thought I was in the clear as I popped Google open to check the nutrition facts. 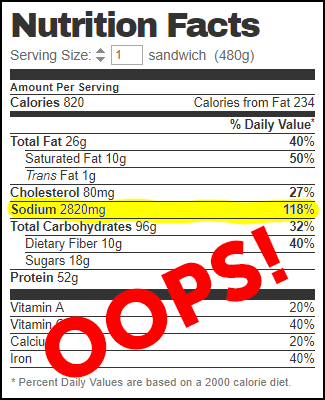 It only took seven minutes. That sandwich knocked my lights out, and the chips kicked sand in my face to the tune of an extra 160 mg. I had thought I could trust Jared, but it looks like he was a double agent.

Shocked and hurt, I made it my mission to start from the bun and work my way up through this sandwich to figure out where all of that sodium came from.

Bread wasn’t the biggest offender in this sandwich, but it definitely played its part. While a normal sandwich you’d make at home wouldn’t contain that much salt in the bread, a whole 12-inch loaf definitely does.

The bread of my sandwich alone hit me with 560 mg, almost 25% of my daily limit by itself. If I had decided to treat myself to Italian herb and cheese instead of the whole wheat, It would have been 940 mg, nearly 40% of my limit.

For the sodium conscious who want to experience a mass market $5 submarine sandwich, go with Italian bread, which has the lowest amount I could find, clocking in at 540 mg per 12-inch roll. On the other hand, if you’ve got nothing left to lose and are ready to sign your life away for maximum flavor, track down their limited release roasted garlic bread, which will hose you down with 2,720 mg of sodium per footlong roll.

Sliced sandwich bread, on the other hand, isn’t going to break the bank. Two slices of wheat bread will net you 224 mg, and two slices of white clocks in at 294 mg. However, biscuits and bagels are far saltier.

An average bagel contains around 400 mg of sodium, and a single Cheddar Bay biscuit from a popular nationwide surf ‘n’ turf restaurant will run you around 380 mg. To me, those biscuits are definitely still worth it.

While uncovering the salty secrets of the bread was pretty shocking to me, the real culprits were hiding beneath the bun.

It turns out that deli meats are one of the leading sneaky sodium bombs in the average American diet, and this is largely because of the meat itself. It was easy to miss, but I soon discovered that deli meat isn’t just meat – it goes through a curing process to make it longer-lasting and better-tasting.

Cured meat has been around almost as long as we’ve been cooking over the first bonfires, and it has always involved a lot of salt. Salting or brining a piece of meat changes its surface by making an environment too salty for bacteria or fungi to thrive, which is what keeps it fresh for longer periods of time.

Traditionally cured meats like pepperoni or prosciutto are preserved by completely covering its surface in salt and hanging it to dry. While most of the salt is washed off of a piece of meat before it’s served, it’s almost impossible to remove all of it from the interior. A single slice of pepperoni has 35 mg by itself. When it brings friends, that’s the recipe for a sodium shakedown.

If the meat is brined in a saltwater solution, like many deli meats, it also changes the way that its protein molecules work, breaking them down a bit and loosening them up. This helps the protein molecules act like a mop, soaking up and holding onto the brine.

If you brine or marinate your meat, it’ll stay far juicier than an unbrined counterpart, which makes deli meat the perfect crime. I couldn’t give up here. I had to know how deep this conspiracy went.

Behind the ham, turkey, and bacon, there was the cheese, another leading sodium bandit. Cheese has a surprisingly wide range of sodium content – a single slice of processed American cheese will run you 468 mg, while a tablespoon of authentic parmigiano-reggiano only nets you 76 mg.

A decent rule of thumb for cheese: the more processed it is, the more added sodium. However, even this rule has outliers. For example, a slice of Velveeta actually contains a bit less sodium than other processed American cheese products.

If you want to have your cheese and eat it too, it might be wise to steer away from the prepackaged slices you grew up with and towards something a bit more organic. Havarti, my personal go-to fancy cheese, only runs you 159 mg per slice, and Swiss cheese looks downright innocent at 54 mg per slice.

Too Late for Schmears

Even after all of the usual suspects, there was still sodium left over in my sandwich. I was horrified to learn that even some of my vegetables couldn’t be trusted. Pickled and canned veggies suffer from a similar salt infusion as brined meat. Unless properly drained and rinsed, canned veggies can sneak quite a bit of sodium into your meals.

Two other noteworthy salty veggie products that I discovered were my old friends, pasta and pizza sauce. Tomato products in general contain quite a bit of added salt to enhance their flavors.

A serving of pizza sauce clocks in at 200 mg, while pasta sauce can bring in 480 mg per serving. Between the garlic-salted crust, cheese, and pepperoni, pizza sauce might look innocent, but it’s the ones who look trustworthy that you have to keep an eye on.

Condiments of all kinds can also be sodium traps. The flavor-boosting power of ranch dressing or Dijon mustard often comes from salt in addition to other flavors.

Ketchup contains around 160 mg per serving, steak sauce has around 280 mg, and if you go for a dressing that incorporates teriyaki or soy sauce, you can easily get to over 1,000 mg per serving. When you consider that most recommended serving sizes for condiments is around 1 tablespoon, a realistic amount of flavoring for some dishes can easily push you over the edge.

The Man Who Eated Himself

At the end of my work day, I went home paranoid. I shattered what was left of my integrity and consciously tried to find low-sodium food for dinner. White rice, pork tenderloin and a salad – the perfect team!

I was right about the white rice, it only added 2 mg to my dish. Generally, unless you’re adding sauce, grains are a pretty safe pick for the sodium conscious.

The meat was a different story. Pork loin on its own is a very low-sodium pick, but this pig brought added salt and a peppercorn marinade to the party – 630 mg per serving.

That salad? I gazed into the fridge and the ranch dressing gazed back at me. Dejected, I read the bottle. 328 mg per serving. It would have to do.

I ended my day at 4,295 mg of sodium – 70% more than the already generous limit I had set for myself. Salt is everywhere, and if you don’t care what you eat, you can find yourself eating double or triple the recommended maximum, which has been proven to contribute to high blood pressure.

Living a sodium conscious lifestyle isn’t easy, but luckily, many food companies are beginning to wise up and offer low-sodium alternatives. Check your ingredient labels – if a food product says it’s got no added salt, it might not be sodium-free, but at least it will be honest with you.

If you’d like to investigate yourself, Google the food you’re interrogating and “nutrition facts.” You’ll normally get a list of nutrition facts on the first page of the results, and if you need to dig into a brand name, it probably won’t be far away.