Every year on the third Thursday in November, smokers take part in the Great American Smokeout event. This event challenges people to stop using tobacco. On this date, participants make a plan to quit, or planned in advance and quit on this day.

The history of the Great American Smokeout began in the 1970s when smoking was prevalent. In 1970, Arthur P. Mullaney, a counselor at a Massachusetts high school, asked people to give up cigarettes for one day and donate the money to a local high school. Then in 1974, Lynn R. Smith of the Monticello Times in Minnesota promoted a “Don’t Smoke Day”. On November 18, 1976, the California Division of the American Cancer Society successfully prompted nearly one million smokers to quit for the day. That California event marked the first Smokeout.

According to the American Cancer Society, about 40 million Americans still smoke cigarettes, and tobacco use remains the single largest preventable cause of disease and premature death in the world. While cigarette smoking rates have dropped (from 42% in 1965 to 17% in 2014), cigar, pipe, and hookah – other dangerous and addictive ways to smoke tobacco – are very much on the rise.

Quitting smoking has immediate and long-term benefits at any age. Quitting is hard, but you can increase your chances of success with help. Research shows that smokers are most successful in quitting when they have support, such as:

The Benefits of Quitting Smoking

The benefits of quitting smoking are aplenty. You’ll improve your health and longevity, and save money. Consider the table below (these statistics are averages and were taken from WhyQuit.com.)

Not only does your body slowly recover from the effects of smoking when you quit, but your wallet will too. If you smoke approximately one pack of cigarettes per day, quitting can save you over $1000 per year on average. If you are curious on how much you could save if you quit, Smokefree.gov has a handy calculator here: How Much Will You Save?

Cigarettes are expensive in more ways than one. They aren’t cheap to purchase and they raise your life insurance costs. As noted in the timetable above, tobacco can cause many health issues and life insurance companies don’t ignore these facts. If you are a cigarette smoker, you’re going to be riskier to insure.

Quitting smoking has immediate and long-term benefits at any age.

The figure below from the Centers for Disease Control and Prevention illustrates just how many health issues are associated with cigarette smoking. 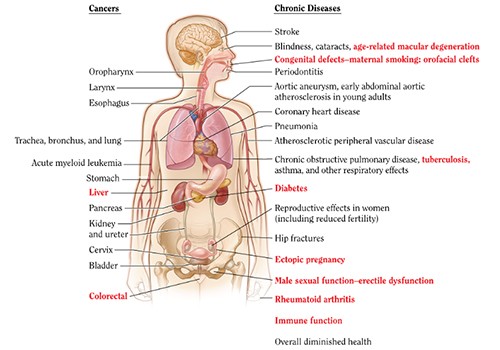 Life insurers weigh the risks of taking on an applicant who smokes and these applicants pay accordingly. There are two categories a life insurance applicant will fall into. You will either be assigned a non-tobacco risk class or a tobacco risk-class. Once you are categorized into one of those classes, you’ll be narrowed down even further.

Smoking is just a habit – it doesn’t label you forever.  If you quit smoking, there are still opportunities for you to qualify for non-tobacco life insurance premiums.  Most insurers require you to be cigarette-free for at least 12 months before being considered for non-smoker rates.  These requirements vary between insurance companies, however.

John Smith smoked a pack a day for 10 years and purchased a life insurance plan to protect his family. Five years after purchasing coverage, he decided to quit smoking. He wants to reapply for coverage to see if he can get cheaper premiums.

John decides to wait until he is 36 months free of cigarette use and then applies to the other insurance company.

Shopping around for different rates is the best way to save money on life insurance. Not all insurance companies underwrite the same, so it’s worth it to compare rates. At Quotacy, you can shop across many different life insurance carriers in less than a minute. The image below shows quotes (20-year $250,000 term policy) for an otherwise healthy 30-year-old male who smokes cigarettes daily. 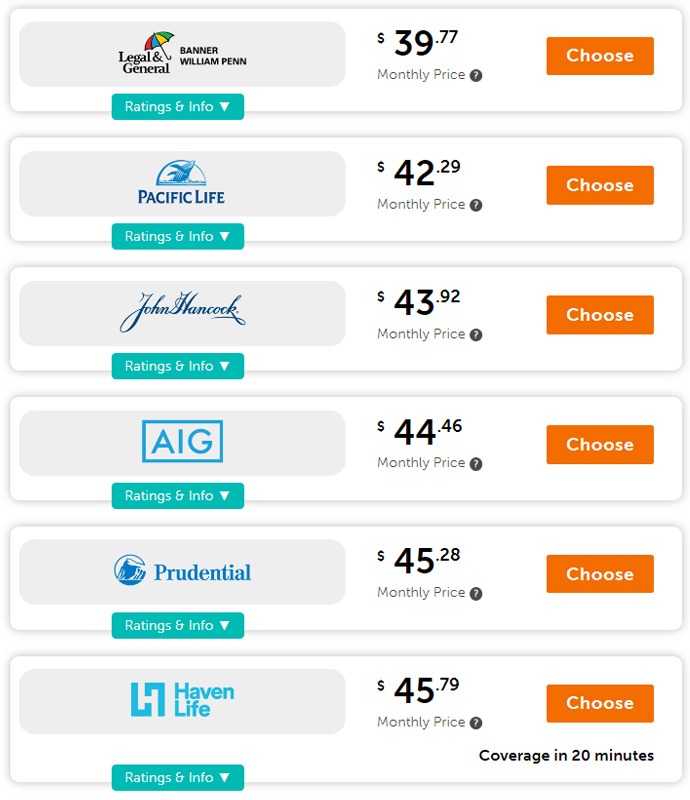 As you can see, costs vary between insurance companies. In addition to your smoking habits, your age, height and weight, family history, and whether you have any health conditions will factor into your cost. Our term quoting tool is easy to use and requires no personal information. Find out for yourself how much life insurance may cost you by running a term quote. You’ll be able to compare rates instantly.

Whether you smoke, used to smoke, or have never touched a cigarette in your life, we can help you obtain life insurance.

Natasha is a writer and content editor at Quotacy. She is also co-host of Quotacy’s YouTube series. She can't get enough of life insurance and outside of work is also working toward her Chartered Life Underwriter designation. Connect with her on LinkedIn.